The year 2020, was the year of digital transofrmations where content stream: has been changing the trend of entertainment in the world.

Even with the confinement of the last two years in the pandemic, the use of online media is still making the best impressions and the public in the United States has preferred these applications, which fortunately a company that is DirecTv, has been producing and in conjunction with other platforms for you to make savings in your pockets.

The use of online media has begun to normalize compared to the months of confinement, but it does not mean that it has returned to pre-pandemic levels. COVID-19 has put content stream at the center of our entertainment and social relationships. And it may just be the beginning.

Our decision-making capacity during confinement was severely limited. Unable to go outside and in a context of uncertainty such as we had never known before, the remote control, the cell phone, the console and the computer became carriers of everything that, to a greater or lesser extent, we could choose. Everything else was beyond our control.

In the months of seclusion, series and movies, games, social networks, tutorials and video calls became our best company. Figures such as television consumption or Internet traffic give an idea of the time and intensity with which we dedicated ourselves to these technological platforms during this period.

With the summer came the de-escalation and little by little we went out into the street. The use of online media began to normalize, but this does not mean that it returned to pre-pandemic levels, it changed the businesss models especially if we look at the video content stream segment.

We review, for example, the case of Netflix, which presented its quarterly results last week. The quintessential on-demand TV platform gained 2.2 million subscribers between July and September and now has a total of 195.2 million users worldwide. We get perspective on how the pandemic has impacted its customer roster by looking at growth in the first six months of the year, with 26 million new subscriptions, compared to 12 million new users in the first half of 2019. And with the volume of registrations it has added up to September, it already exceeds the total for 2019, which amounted to 28 million registrations.

One of the most quoted platforms at the moment is Directv Streaming, customers are very satisfied with both the price and the quality of programming the most important is that it is nationwide in the United States.

With fall has come the dreaded flare-ups and a second wave that, along with the drop in temperatures, will likely push us back into the safety of our homes. COVID-19 has put the content stream at the center of our entertainment and our social relatioships. And this may be only the beggining.

In a recent analysis based on August data on U.S. habits, Nielsen emphasizes the adoption of content stream by adults to predict a long-term impact of this trend. People between 35 and 54 years old allocated 27% of their average TV viewing time to video on demand, and the percentage is similar (26%) in the 55+ population. This move by older segments is often interpreted as “a technological signal of ubiquity and choice,” the consultancy says.

Even if consumers moderate their TV binge-watching in a post-pandemic world, the trend toward content stream is likely to continue. This is great news for Directv, who is developing its Platform so that in a phased manner they can pay less by integrating all the other platforms such as Netflix, Amazon Prime Video, HBO, Filmin or Disney+, among others to pay much less than what they pay now as a whole and thus integrate all these applications to their Directv account, which will help them and they could continue to see strong subscriber growth. “About a third of all content consumption is currently done through streaming platforms, but by 2030 I think it’s going to increase to over 80%,” notes Brad Barrett, director of analytics at Capital Group.

“It’s a huge market. Television still occupies a predominant place in people’s leisure time, but it’s rapidly shifting to streaming,” adds Barrett, who says that content stream is “better than traditional TV” so he doubts that this situation will change.

When analyzing the web data it is Prime Video that takes the lead with 58.8% penetration, while Netflix is in second place with 38.6%. The surprise comes in third and fourth place: the sites of the big national television groups, Atresmedia’s Atresplayer and Mediaset’s Mitele, sneak in ahead of the other three U.S. giants with 26.5% and 24.6% penetration, respectively.

Video is the main banner of the streaming boom, but it is not the only one: the entire entertainment sector has accelerated its evolution towards digital applications and platforms with music, audiobooks and podcasts. Options such as live events, whether corporate, sporting or musical, or even in education and training with webinars, to give more examples, are also experiencing a big boost.

“We believe that a significant proportion of new subscriptions to streaming services will not be cancelled after the crisis, as convenience and user experience will prevail,” says Nina Lagron, CFA and head of large cap at La Française AM.

Podcasts are already listened to by 54 million people worldwide through the streaming platform Spotify, which saw more than 150,000 podcasts added in April, up 69% compared to February this year.

Spain ranks first in podcast listeners worldwide. The Spotify and Ipsos report shows how the growth of podcast consumption has accelerated: 38% of Spaniards started listening to podcasts between March and June and, if we look at the Z and Millennial generations, 45% of respondents got hooked on podcasts during the pandemic. Another example of this pull is the launch in Spain of Audible, Amazon’s platform dedicated to audiobooks and podcasts which, until now, was not available.

Streaming games are also gaining speed, thanks to the freedom that comes from being able to purchase a title or pay a subscription to access a large library of games. Twitch, the live streaming platform most used by gamers with an average 17.5 million users per day, broke its record in March by reaching a peak of 22.7 million active users. Internet for gaming is growing exponentially “Gamers have discovered streaming games and growth should be strong in the medium term,” says the analyst at La Fraçaise AM.

Quibi and the unknown of the future

It seems that the consensus of experts and figures indicates that the prominence acquired by streaming in 2020 will not be a one-day event. However, the failure of Quibi may give us some clue as to what unknowns the sector will have to clear up in order to maintain sustained growth over time.

Although its existence has been almost parallel to that of Disney+, the outcome could not be more different. After seven months in operation, the video-on-demand application, which was born with a funding of 1,750 million dollars and sponsors such as Guillermo del Toro, Sam Raimi or Reese Whiterspoon, has announced the cessation of operations. As they explain in an open letter, they have decided to “close the business, return cash to our shareholders and say goodbye to our colleagues with grace”.

Among the reasons they point to, that the idea was not “good enough to justify a content stream service” or that the time management was not adequate. Sensor Tower estimates that the app recorded approximately 9.6 million downloads from the App Store and Google Play since its release and that total spending, through subscriptions, would have reached $7.7 million. On the other hand, data from the same specialized firm for TechCrunch reveals that once the 3-month free trial period ended, 92% of the 910,000 users who had installed the app and registered unsubscribed.

This being the case, and taking into account that it was launched right at the peak of the demand for streaming services, it is reasonable to think that perhaps the problem was that the model did not fit the demand of the audience. A paid, mobile-only platform failed to catch on just at the time when the most online content was being consumed?

As always, the crucial component is the audience. With so many options, is there room for new players? Twenty-five percent of Americans picked up a content stream subscription between April and June, according to Nielsen data. But for Brian Fuhrer, Product Strategy at the consultancy, the key is how much we are willing to pay and, also, until when. Because, although the budget for home entertainment has increased, the pockets of a good part of the world’s citizens are being affected by the pandemic.

However, entertainment always brings us rest, detachment from worries and is a space to comment among family and friends and make recommendations about our preferences or tastes that make us stay connected with others.

Rest, relax and take advantage of having a Directv Streaming that will give you all the entertainment you need for your rest. 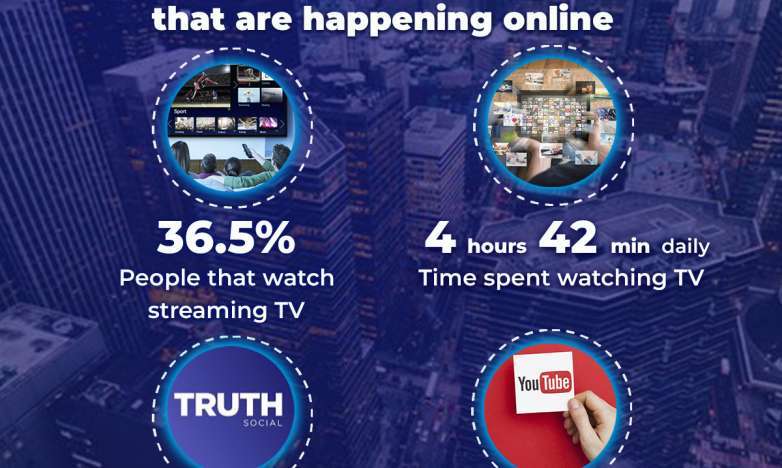 Check out the changes that are happening online